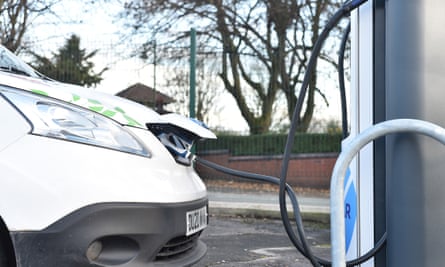 New Automotive says that the 2030 date will not deliver the even split between electric and fossil fuel ‘car miles’ needed to meet the government’s climate targets. Photograph: Nathan Stirk/Getty Images

The prime minister’s plan to bring forward a ban on the sale of new fossil fuel vehicles by 10 years to 2030 will still not go far enough to meet the government’s own legally binding climate targets, according to new research.

Boris Johnson is expected to accelerate the shift to electric vehicles by setting out a new deadline for the sales of polluting passenger cars as part of a 10-point plan to tackle the climate crisis due to be revealed this week.

But a report from New Automotive, a transport thinktank backed by Quadrature Climate Foundation, has warned that the number of fossil fuel cars likely to roll onto British roads before the ban will be enough to blow the UK’s carbon budgets.

But this forecast is still almost 40% higher than the interim target set by the government’s official climate advisers, the Committee on Climate Change, to cut car emissions to 32.8MtCO2e by 2030.

The thinktank estimates that the government would need to set a sales ban of 2026 for internal combustion engine vehicles or introduce extra measures to reduce car use if it hopes to meet its own 2030 carbon budget.